Our run on Saturday took us from the Kachina Trail to Weatherford Trail up to the Doyle and Fremont Saddles before passing along side Agassiz Peak and finally climbing the summit of Humphreys Peak. After a quick summit of Humphreys Peak we took the fast descent down the Humphreys Trail for a round trip total of 22 miles (normally 21 miles but we ran a mile at the start looking for the actual trailhead for Kachina?!).

Starting at 9,304’ above sea level Andy and I dropped down to a low of 8,795’ above sea level before climbing all the way to the peak of Humphreys at 12,633’. I’ve been sleeping in a Hypoxico altitude tent to get ready for the Tahoe Rim Trail 100 Mile Run in July but only for the past two weeks so it’s likely done more harm than good at this point. I didn’t feel the typical affects of altitude like headaches, lack of oxygen etc. but it certainly slowed down my running pace. 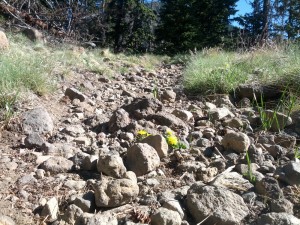 The trail went from smooth and groomed on Kachina to five miles of running on marbles when we hit the Weatherford Trail…then it got bad. All week we wondered if we would get a chance to see some snow near the top, by time we hit the Doyle Saddle we had more snow than we ever cared to see. In places we could see where there were landslides/avalanches since last Fall and snow was at least 6’ deep and more in several places as we post holed our way through not knowing most the time where the trail even was. It took us over 48 minutes to go one mile, then 35, 27, 48 and 37 minutes over the next four miles. I wouldn’t do it again this weekend but its great to look back on and something I’ll not soon forget. Meanwhile as we were plowing through the snow at 11,000’ above sea level the temperature was 106° at home, less than two hours away by car.

After reaching the peak of Humphreys we had a rocky one mile descent back to the main trail then five miles of roots and hell to the parking lot. Maybe the Humphreys Trail isn’t that bad if you start out on it but after climbing over 4,500’ between 9,000’-12,600’ and 17 miles the roots and rocks on Humphreys sucked. I was glad to see out of shape people in jeans and sandals walking on the trail, that meant I couldn’t be very far from the parking lot, and sure enough in less than a mile I came out of the trees to a narrow open meadow (a ski run in the winter) left to get to the parking lot. 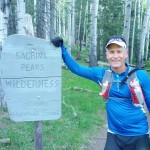 Andy excited at the start 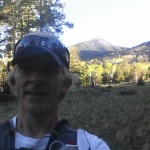 Early in the morning on Kachina. Within a few hours we’ll be running up Humphreys Peak behind the peak behind me. 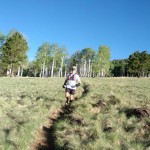 Running through a meadow on Kachina Trail 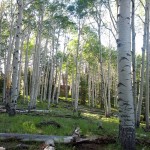 One of many Aspen stands 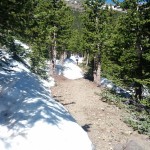 The easiest part of the trail between Doyle and Fremont…all 50 yards.

Hard to find the trail through this snow. 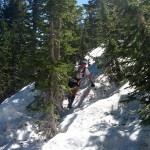 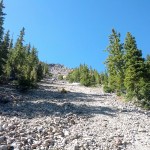 Alavalanche/rock slide. It wiped out the trail. 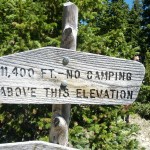 Someone would really want to do that? 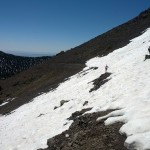 Andy traversing toward Agassiz Peak. This was not a fun area. 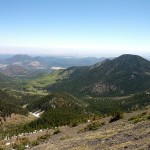 Looking down at Inner Basin 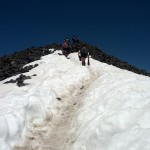 Nearing the summit of Humphreys Peak 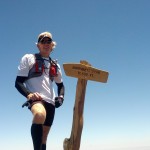 At the top. The Highest peak in Arizona. 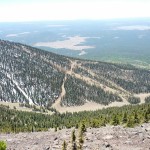 Looking down on Snow Bowl Ski

On a scale of 1 to 10 this run was a 12. I can’t wait to do it again but I’ll gladly postpone it until after I run the Tahoe Rim Trail 100 in late July so the snow has a chance to melt.

Until the next time…be safe and have fun!