In your 20’s when you go out chasing women and drinking all night long it was called “sowing wild oats”…now 30 years later it’s called “ultra running”. Although the actions and ultimate goals have changed drastically it really isn’t that much different. June 8, 2013 with my wife and kids out of town and the Tahoe Rim Trail Endurance 100 Mile Run only six weeks away I made my way out to our local county park for the Aravaipa Running Insomniac Series Adrenaline Night Run. My goal was to run 65K (40 miles for you metrically challenged readers), chase women (and men) in hopes of passing them and drinking enough water all night over that distance to survive the 106° start time temperature. Basically all I wanted to do was get some miles on my legs, as it turned out it was a night I won’t soon forget. 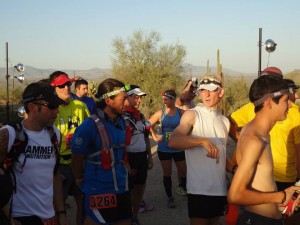 I can tell this story in the long version or the short version, I’ll spare you a lot of the details and give you the short version. As I mentioned the temperature was hot, driving into the park 20 minutes prior to the start my truck thermometer read 106°. The local runners had been watching the forecast all week so it wasn’t a surprise that most of the prerace favorites weren’t “racing” but simply out to get some miles and enjoy their friends. A week prior to the race local favorites Jay Danek and Paulette Zillmer had conspired to run a few laps together to use the race as a supported training run (more on Jay Danek later). Chris Stanfield fresh off finishes at the brutally tough Zane Grey 50 Mile and Jemez Mountain 50 Mile races dropped after two easy loops (16 miles) as he prepares for the Tahoe Rim Trial Endurance Run in July and Seth Redden, who’s always a podium threat, ran one eight mile loop with the leaders then joined his preteen children as they competed in the shorter distance races also taking place on the same loop course. The only local runner putting in a full effort was the cyborg Cristian Rios. Do they really call him “The Cyborg”? I doubt it but he ran like he wasn’t human in the heat to pull away with an impressive 40+ minute victory. In a sport where age and experience is a big advantage this 20 year old out of Phoenix, AZ looks to have an exciting ultra running future ahead of him. But I digress…back to chasing women and drinking all night long. 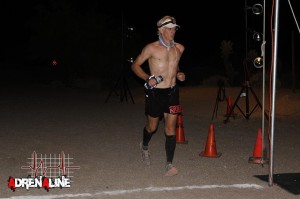 After the sun went down the shirt came off. It was still 90°+ but felt cool with a slight breeze in the desert.

As I made it through the first of five, eight mile, loops I had been running as a very conservative pace and drinking 21 ounces of water every four miles plus chugging more water at the aid stations. In my 20’s I chugged beer at the bar, we thought of them as “aid stations” at the time though. I did this for the first 24 miles of the run and things were fairly uneventful except the last ½ mile of each loop was uphill and I would enter the start/finish line aid station needing a minute to get my heart rate down as volunteers filled my water so I could go back out. At the end of 24 miles friend and local favorite Jay Danek came over to talk for a few minutes. As mentioned previously Jay had just been out for a few planned loops to get some training miles in and stopped after 16 miles. Jay asked if I wanted some company on the next loop but I declined. As most of you know Jay runs every day…as in 923 days in a row until he took one day off last year on 9/23/2012, and hasn’t missed a day of running since then. Jay was hanging out until midnight so he could go back out to get in four miles then go home. I felt good but it was approaching midnight, way past my normal bed time so I was feeling tired when I went out for my fourth loop.

After a few miles on loop four I tripped for at least the 10th time and hit the ground deepening the bruises on my already sore hands and taking more skin off my already bloody knees. After a string of four letter expletives I picked myself up and heard “John? You ok?”. It was Jay. He’d taken off at midnight to get his daily miles in but caught me before he turned around. So Jay and I took off down the trail talking and laughing and simply enjoying each other’s company and getting some miles in for training. When we approached the half way aid station on the loop I still had some water in my bottle, which I shouldn’t have, and had them top it off before heading out without drinking extra as planned. Jay and I were making good time for me at this point in the run after close to 30 miles. As we hit the last ½ mile uphill section I suddenly got extremely light headed at the top of a short but steep climb. Oh shit! That’s not a good sign and I immediately knew I was over the edge of dehydration. 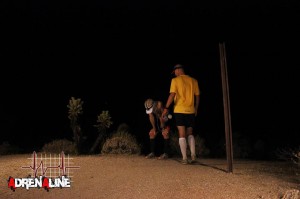 Jay trying to get me to move…Jay’s not a very sympathetic person I found out. (There are pictures of me in my 20’s bent over ready to hurl floating around too I’m sure.)

With Jay telling me to get moving and me trying to go slow and keep it together neither of us won as I went down on the trail within just a hundred yards of the start/finish line aid station. Before I made it the last few yards I had a medical EMT and race officials bringing me a chair then a cot to lie on. I quickly learned EMT’s don’t have a good sense of humor when they’re responsible for your well being…they take their responsibility very seriously.

As I laid on the medical cot the EMT took my blood pressure…90 over 70. She tried taking my pulse but couldn’t get a pulse. After several failed attempts I tried to explain that I did in fact have a pulse but no matter how hard I tried she wouldn’t let me leave. One by one as I laid on the cot, shivering and shaking because what blood I had left in me had left my extremities to protect my internal organs and keep them working (according to the EMT) I watched runners pass me and my 5th place position slowly turned into dead last. After 1 ½ hours being held captive by the EMT my blood pressure was up to 97 over 70 but still no pulse. This entire time my loyal sidekick, Jay Danek, sat by the cot listening to my nonsense and insisting he wasn’t going home if I was going back out on the trail. The EMT finally and reluctantly allowed me to sign a release form, I filled my water bottle and I was back on the trail.

While I was slogging down the trail Jay ran into a friend, Lisa Larabell, who was going out for her last loop too. This was the longest run Lisa had ever attempted so I told Jay to stick with her no matter what, as it turned out all three of us ran the last eight miles together. It was one of the most enjoyable eight miles I can remember as Jay and I bantered back and forth, laughed at how stupid I was to put myself “on the cot” and watched Lisa run nearly every single step of the way. Her determination was inspiring and made me remember why I enjoy these long runs so much. It’s not about the miles or the physical speed, it’s about the mental determination and perseverance.

When I finished, in dead last place, I found the EMT that helped me. During the 1 ½ hours on the cot I gave her such a bad time, always jokingly but I’m pretty dry and pretty sarcastic so it’s hard to tell sometimes if I’m joking or not. When I got close to the EMT she gave me a big hug, told me she was so proud of me for finishing but still thought I was an idiot for going back out.

So in the end I got my 40 mile training run in with a little 1 ½ hour + rest and a lot of personal satisfaction. And just like in my 20’s I let every single woman get past me and even though I drank all night long I once again experienced the feeling of not drinking enough. AND I know there are some embarrassing pictures floating around out there that haven’t surfaced …yet. I’m sure if I run for public office in 2014 it will take less than 24 hours for Justin Lutick and James Bonnett to post those pictures on the internet.

Since the fateful 40 mile night at the Adrenaline race I took it easy by running 70 miles the following week. Then this week I put in my longest week to date in this training cycle by running 103 miles.

Most days I woke up between 3 – 3:30 a.m. trying to beat our Arizona June heat. Saturday I woke up at 2:10 a.m. All fun stuff? No not really…it sucks, especially when I don’t turn the lights off most nights until after 10 p.m. But it is what it is and I’m finally this week feeling like I’m both mentally and physically close to being ready to tackle 100 miles in the Sierra Nevada Mountains at Lake Tahoe where the average altitude for the race will be more than 8,000 feet above sea level (a high point of 9,214 feet above sea level). Have you ever been in the mountains? It not flat up there either! Tomorrow, Monday June, 24 I’ll take a day off from running, my first in almost two weeks. I’ve run 19 out of the last 20 days so I’m looking forward to not running tomorrow and only lifting weights at the gym. Then Tuesday I start another week where I’ll run 94 miles over six days before starting my three week taper going into the Tahoe race.

Thanks for reading and all your supportive comments. Until the next time…be safe and have fun!

2 Responses to Chasing Women and Drinking All Night Long